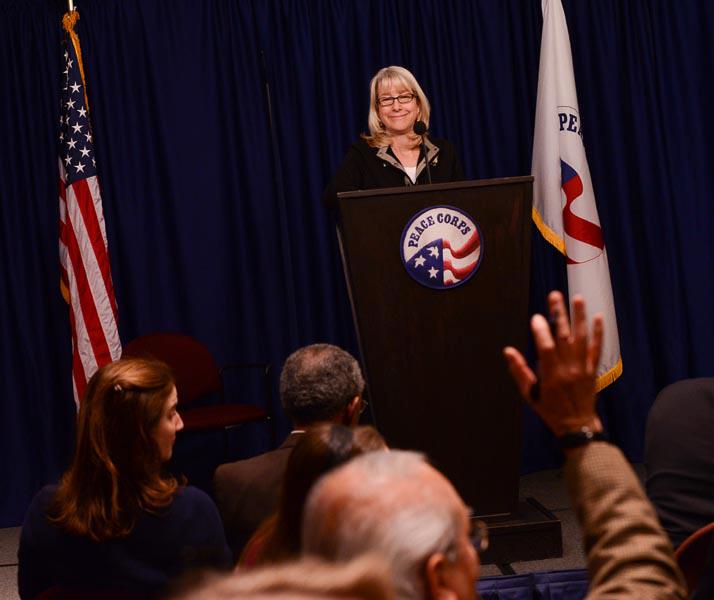 Carrie Hessler-Radelet was confirmed as the 19th Director of the Peace Corps yesterday. We applaud the work that she has already accomplished on behalf of the Peace Corps Community and look forward to a bright future for the agency.

Mrs. Hessler-Radelet (Western Samoa, 1981-83) came to Peace Corps in 2010 as Deputy Director from John Snow Intl, and assumed the role of Acting Director in September 2012. Since then, she has been instrumental in guiding the agency forward, supporting volunteers both abroad and at home.

From our perspective, Mrs. Hessler-Radelet has shown herself to be an understanding, trustworthy leader. She led the implementation of the Kate Puzey Act, addressing serious structural problems in the agency and working to foster a climate that protects and supports victims of sexual assault. She has been extremely supportive of LGBTQ volunteers, and under her watch same-sex couples have been permitted to serve together. There is still much work to be done, but changing organizational systems is a slow process, and we have faith that the new Director of the Peace Corps possesses the same deep devotion to its volunteers as the first.

On the home front, Mrs. Hessler-Radelet has done much to strengthen ties within the RPCV community. Having led the Office of the Third Goal, she is particularly attuned to the fact that Peace Corps doesn't end with a COS letter and a readjustment allowance. The working relationship between the agency and the national and regional Peace Corps associations has never been stronger thanks to her inclusive style of leadership. Embracing innovation as more than just a catch phrase, she's been instrumental in preparing the next generation of volunteers to be changemakers in a digitized, rapidly-developing world. Recognizing that NCE can be a bit mystifying, she coordinates with RPCV employee resource groups forming in dozens of agencies, promoting NCE from the top-down while they educate their hiring mangers from the bottom-up. She has clearly prioritized the needs of the returned volunteer community and is now in the position to act.

For these reasons and many more, the Returned Peace Corps Volunteers of Washington, D.C. congratulate Director Hessler-Radelet on her confirmation, and encourage the community to thank her for her service.