Each year, RPCV/W presents our Peace Corps Champion Award to an individual whose work has made a great impact on the Peace Corps and its community. This year we honor Jonathan Pearson, RPCV Micronesia 87 - 89 for his diligent leadership of the NPCA Advocacy Program. 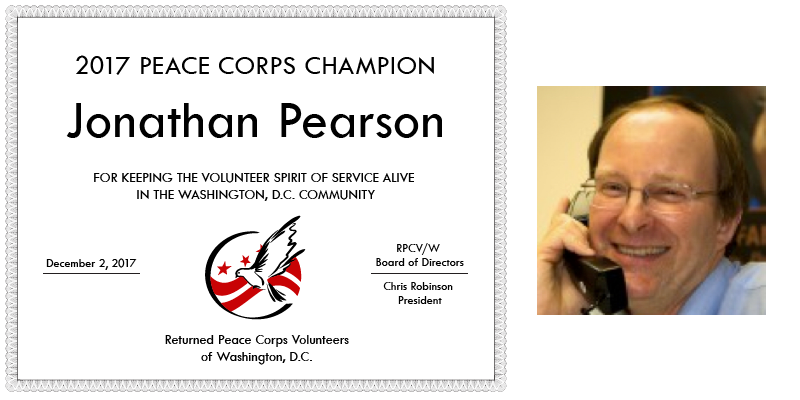 Jonathan is the Advocacy Director for the National Peace Corps Association, where he mobilizes the Peace Corps community to influence their elected officials on issues of importance to our community. He has been a member of RPCV/W since 2002 and a driving force behind the long-term health and sustainability of the Peace Corps. For these reasons, we are honored to award him with our organizations highest, and only, distinction: Peace Corps Champion.

Few people understand the relationship between Congress, the Peace Corps and the grassroots like Jonathan. Each year he spearheads the Congressional Day of Action, which began with a handful of volunteers handing out fact sheets and grew into a multi-day event where RCPVs from all over the country travel to DC to make their voices heard. In addition to promoting a healthy budget for the agency, Jonathan and his team have expanded the focus of the Advocacy Program to include issues that matter to the Peace Corps community as a whole, such as opposing cuts to foreign aid programs and fighting for health justice for PCVs and RPCVs.

With a changing administration and heightened uncertainty in Congress, 2017 was an especially difficult year for the Peace Corps and its kindred Service Year programs. Jonathan and his colleagues responded with a coordinated campaign to educate new policymakers about the Peace Corps and the value of volunteer national service. Affiliate groups, including ours, re-affirmed our commitment to the inclusive values that keep us together and the 2017 Advocacy Week was a resounding success, resulting in a strong possibility of level funding for the Peace Corps. In June, advocates returned to Capitol Hill to advance much-needed health legislation in the House of Representatives, and last month 106 affiliate groups signed a letter to the President, with the goal of reducing or eliminating proposed cuts to the Peace Corps in 2019.

Together with NPCA President Glenn Blumhorst, Vice President Anne Baker, Government Relations Officer J.M. Ascienzo, Special Projects Coordinator David Fields and Partnerships Coordinator Amanda Silva, Jonathan and his colleagues have laid the groundwork for an agency, and a community, that can persevere in a changing world while staying true to its roots. We offer him our heartfelt thanks, and hope you will join us on Saturday, December 2 to congratulate Jonathan in person at the 2017 Holiday Party. We have much to celebrate.