Peace Corps Changed My Life Before I Was Even Born 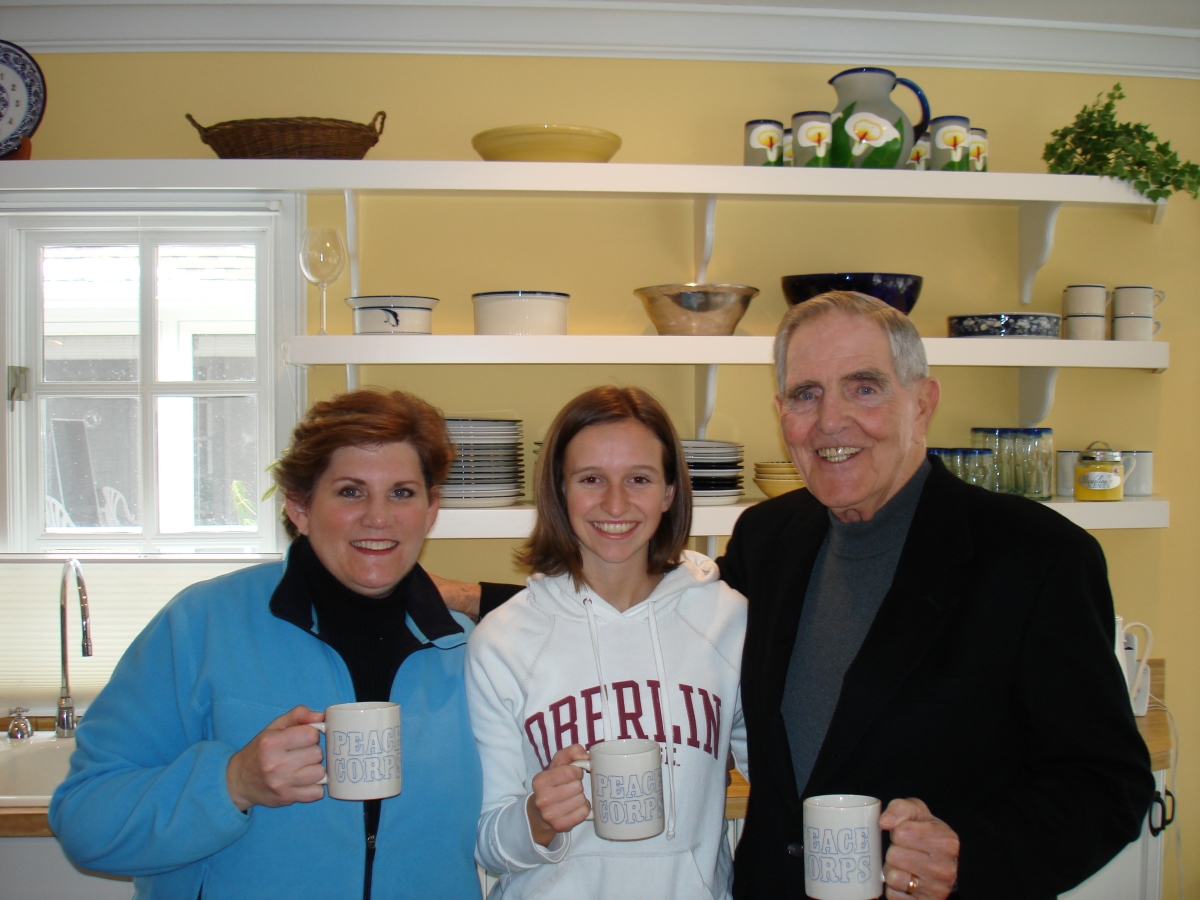 When my father was 12 his father died. At his funeral he met a man named Kevin O’Donnell and his wife Peg O’Donnell, who were close friends of the family. My dad told me that he had an immediate connection to this man and wished he could be his father.

This is something I learned when my father gave Kevin O’Donnell’s eulogy in 2012, almost 40 years after he first had that thought. It turns out that Kevin did become his dad, because just a few months after his own dad died, Peg O’Donnell also passed away. This left my dad’s mom, Ellen, widowed with two kids and his dad to be, Kevin, widowed with six kids. Within a year they decided to get married. They adopted each other’s children to form a family of 8 kids, with ages ranging from less than a year to 16 years old.

My father, his mom and his sister moved from Royal Oak, Michigan to Cleveland, Ohio in the summer of 1965. At the time, Kevin (my fathers new father and my grandfather) was the general manager of a steel company in Cleveland but was ready for a new challenge. He saw an article in the newspaper about the Peace Corps and their need for experienced leaders. He had heard about young college grads joining the Peace Corps, but it had not occurred to him that they needed older, more experienced managers to run the programs. Kevin thought it sounded like a good idea so he sent them a letter. They called him for an interview and within two weeks offered him the job of setting up and running the Peace Corps in Korea. The next thing anybody knew, Kevin & Ellen and their 8 children were moving to Seoul, South Korea where Kevin would serve as the first director of Peace Corps Korea. My dad spent all four years of high school at Seoul Foreign School (SFS), which at the time was a small school mostly for the children of missionaries. He had 18 students in his graduating class…the largest graduating class up to that point in the school’s history.

Twenty-seven years later my father returned to Korea for his high school reunion and my mother and I went along. To this day I can’t say why, but I fell in love with the country and started crying on the plane on the way home. I told my parents I didn’t want to go home, that I wanted to stay in Korea. I asked if we could move to Korea or if they would send me to Korea, so I could go to SFS and Mrs. Moon could be my teacher. Of course they said no and I cried. Every few months, I would ask if we could move to Korea, my dad would say no and we would all laugh.

It turns out that they were working on turning that “no” into a yes. One night when I asked if we could move to Korea over dinner my parents said yes. I think it may have been the most ecstatic I have ever been. I started crying uncontrollably with excitement. 6 months later we were packing up our house for the move. Once I got over jetlag I felt like I was home, happy and comfortable as I started my freshman year of high school.

The next year was spent among friends from all over the world. I enjoyed Korean food at the local vegetarian Buddhist restaurant, did lots of shopping, learned to say I’m a vegetarian, give directions, say I don’t speak Korean, and most important, to bargain.

I loved SFS and was challenged academically in a way that I never had been before. I joined the cross country team, then the swim team, then took up saxophone lessons, (and subsequently quit all three due to knee and jaw trouble), was in three theater productions, became a “super Christian”, had three wonderful friends, amazing teachers and loved it all. Seoul was one of the safest cities in the world. As a 14-year-old girl I was able to explore Seoul by foot, subway and cab; I had freedom I never had in suburban Michigan. At the end of the year they invited my father to stay on, but he had commitments in the US and decided it was time to go back. I had mixed feelings about going back. Part of me wanted to stay, but a big part of me was excited to go back to public high school in the US where I wouldn’t have to study so much.

I give my grandfather and father a lot of credit for shaping my life, but I think the women that supported them also had a lot to do with it. My grandmother spent her early years living in China where her father was a medical missionary who built the first western hospital in the country. When my grandfather proposed moving to Korea with 8 kids, my grandmother did not think it was a totally crazy idea and she agreed. Maybe having spent her first few years in China had something to do with it.

My own mother also had a lot to do with it. In college she choose to study abroad in Israel. As a Catholic, she was among one of the few non-Jewish students in the group. She felt a strong sense of pilgrimage in visiting the country and its holy sites. When we first visited Korea David Pollack spoke about the concept of the Third Culture Kid. My mom finally understood a little bit more about why my dad is the way he is.  When my dad said he wanted to find work abroad so I could have the same experience he did, my mom was willing.

Spending just one year in Korea changed my life. I returned with a broader sense of the world and my place in it. I felt as if I could go anywhere, live anywhere and do anything. I also developed a very strong academic work ethic and a very strong religious connection that pushed me to transfer from my local public high school to an international high school. If that hadn’t happened, I would never have gone to Oberlin College and maybe never would have been challenged to become the person I am proud to be today.

My aunt Megan spent four years in Nepal with the Peace Corps. When she returned she had a nose ring and I like to think that was what did it for me. Honestly I can’t say exactly when I started wanting to serve in the Peace Corps, but for as long as I can remember I wanted to.

I landed in Honduras in 2007. I was lucky enough to work on two exciting and productive projects where I felt like I made a substantial impact. I had a wonderful relationship with my Honduran counterpart and still talk to her every year on her birthday. I spoke Spanish and still do. I traveled across the country and throughout the region. I had close Honduran friends, joined a local dance group and was a big fan of the local football team. I became much more comfortable with my place in the world, learned how to be alone, live simply, find ease amidst discomfort, and learned how to exist in a foreign culture. I realized that the privilege and power I have from being an educated American is not something I should feel ashamed of, but rather it is my obligation to use the knowledge and power I possess to work hard to make the world a better place.

It’s easy to look back with rose-colored glasses, but there were certainly frustrations. I hated the culture of machismo that allowed men to dominate; I loathed the lack of self-determination and apathy that I saw in Honduras, a country that had suffered through decades of disillusionment, corruption and foreign intervention. I was frustrated when people would commit to a project and then not follow through. I hated the phrases ya viene, fijase que and algo se presentó. By the end of two years I could no longer stomach eating rice, beans and tortillas.