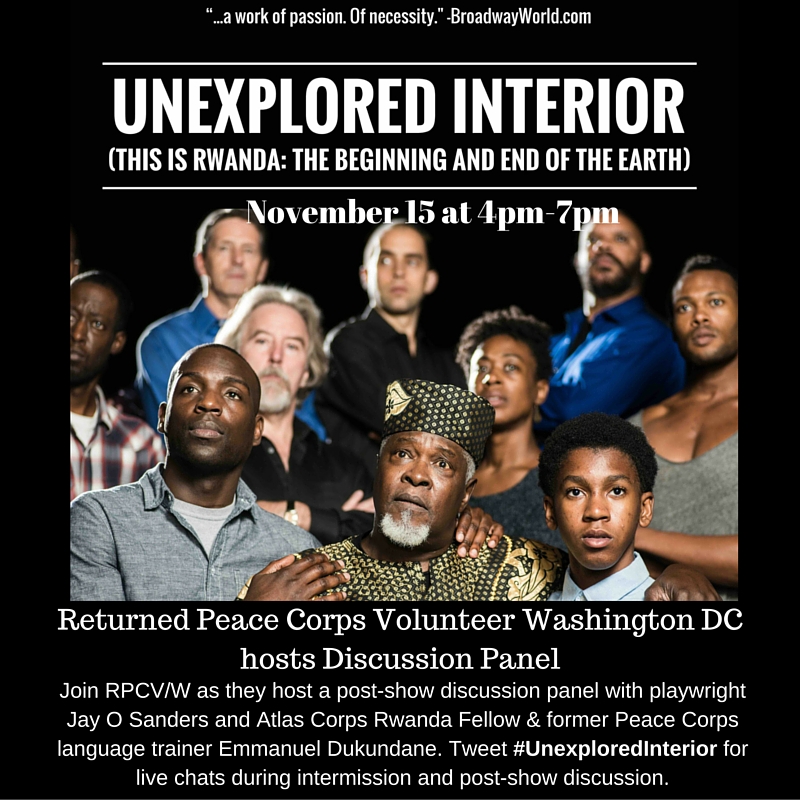 The show is still on until Nov 30! RSVP here and we will email you a 50% discount code for tickets.

On November 15, 2015 we had a special showing of the play and a panel discussion on its themes. The information below was from that posting:

Join Mosaic Theater Company for a special performance of this world-premiere epic about the madness and majesty of Rwanda. Raymond, a film student at NYU enthralled with the mysteries of Alfred Hitchcock, is compelled by a mentor's death to return to Rwanda to uncover a deeper horror story: the roots of violence that have destroyed his family, including his beloved grandfather, a Tutsi master storyteller whose legacy Raymond seeks to redeem.

Read what Washington Post theater critic is raving about this play.

Tickets are normally $60, but if you RSVP here, we will send you a discount code to bring them down to $20!

Use #UnexploreInterior to tweet comments and questions during the intermission. Following the play, there will be a brief discussion with the playwright himself, Jay O Sanders, and Rwandan Atlas Corps Fellow and former Peace Corps Language trainer Emmanuel Dukundane.

Jay O. Sanders has had a 40 year career as an actor. A graduate of S.U.N.Y. at Purchase, he started out in NY’s Shakespeare in the Park, then joined the resident company here in D.C. at Arena Stage. Moving freely between film, TV, and voice work, Sanders’ central passion has always been the theater where he has played many of the great roles in Shakespeare and other classics and has devoted much of his time to birthing new American plays. He is an original company member of Richard Nelson’s Apple Family series, created over the course of four years at the Public Theater, filmed for WNET in 2013, which recently toured Europe. Sanders has also travelled extensively with Bryan Doerries’ Theater of War, taking Greek tragedy into U.S. military communities, as a tool for promoting healing dialogue about PTSD.

Emmanuel Dukundane was born and raised in the Eastern region of Rwanda. Having earned a Bachelor’s degree in Environmental Chemistry from National University of Rwanda in 2009, Emmanuel is currently completing his second year in the Master's degree program in International Education at SIT Graduate Institute in Vermont. He has worked in cultural immersion and service-learning programs for American students in Rwanda and Senegal and has also worked as a Language and Cross Culture Facilitator for US Peace Corps in Rwanda. Emmanuel is currently an Atlas Corps Fellow serving at CorpsAfrica in Washington D.C.