Beginning in 1984, members of the Washington DC Peace Corps community have gathered at the gravesite of John F. Kennedy to spend a few quiet moments in remembrance for the founder of the Peace Corps. The tribute below was written for the 50th Anniversary Event Program and tells a story that every RPCV knows by heart. View a collage of photos from the 2019 event here. 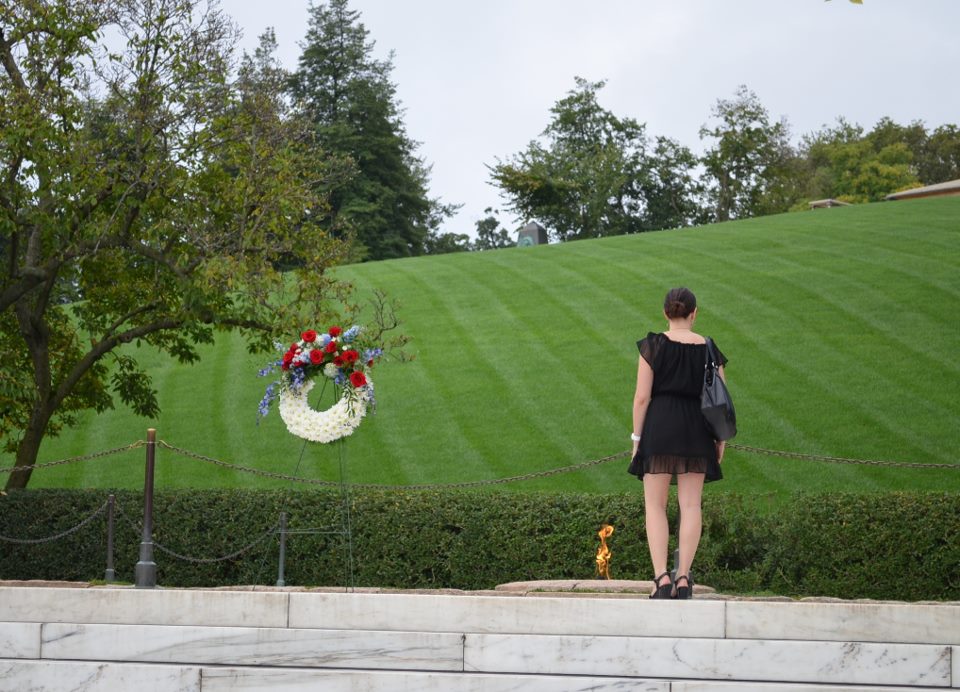 In the early hours of October 14, 1960, Presidential candidate John Fitzgerald Kennedy arrived at the Ann Arbor campus of the University of Michigan. Weeks away from election day and locked in an electoral toss-up with his opponent, Vice-President Richard M. Nixon, Kennedy was touring the country in a final push to counter Nixon’s effort to define him as inexperienced, naïve, and weak on the issue that defined the race: the rapidly escalating cold war on global communism.
Earlier that year, a U.S. spy plane had been shot down over Soviet airspace, its pilot captured, and the U.S humiliated. Kennedy was under tremendous pressure to demonstrate that he would be a calculating and forceful commander-in-chief capable of aggressively meeting the Communist threat. In Michigan, his advisers gave the exhausted candidate a cautious, carefully-vetted statement that would satisfy the student reporters and whoever else was still on campus at 2 a.m.
When Kennedy took the makeshift podium, he met 10,000 waiting students. As they cheered, he discarded his notes and delivered an extemporaneous foreign policy address in 381 words. It was defined by a challenge: “How many of you who are going to be doctors are willing to spend your days in Ghana?”
A few days later, Kennedy received his answer: a petition signed by 1,000 Michigan students who wanted to serve their country overseas. On Nov. 1, just days before the election, Kennedy gave a speech using the term “Peace Corps” for the first time. He received more than 25,000 letters in response. As one of his first presidential acts, President John F. Kennedy signed an executive order that created the Peace Corps. When Congress officially authorized the organization on September 22, 1961, hundreds of Peace Corps Volunteers were already serving in Ghana and Tanzania.
When Kennedy encountered those screaming Michigan students at two in the morning, he articulated a vision of America’s power that transcended the metrics of its nuclear arsenal, gross domestic product, or strategic alliances. Kennedy recognized that if the United States government failed to channel the talents, goodwill and independent initiative of its people, it would squander a strategic asset that no country on earth could match. Forty years before the internet, Kennedy had the clarity of vision to imagine a world in which international relationships could be defined not by treaty-certified “friendships” between states that were, for the moment, at peace, but by the genuine article: the bonds that exist between individuals, forged through common struggle, open communication, and resolute compassion.
“Nothing carries the spirit of American idealism and expresses our hopes better and more effectively to the far corners of the earth than the Peace Corps,” Kennedy said in his final State of the Union address. And if the Peace Corps is not Kennedy’s greatest legacy, it is certainly his most astounding. John Fitzgerald Kennedy made the government of the United States the most effective and efficient organization in the world at placing hundreds of thousands of people in the most remote locations on earth for the express purpose of serving their country by serving the citizens of other countries. 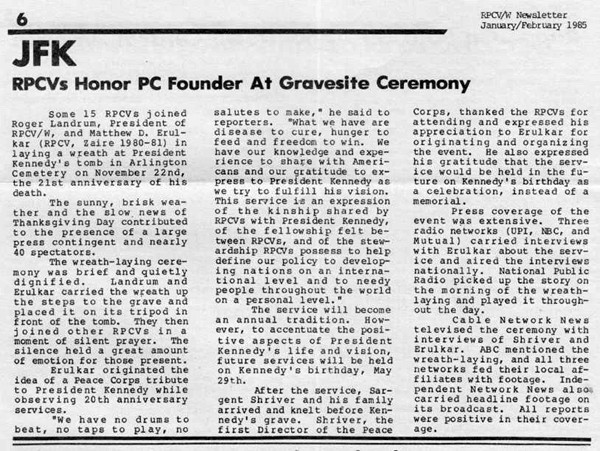