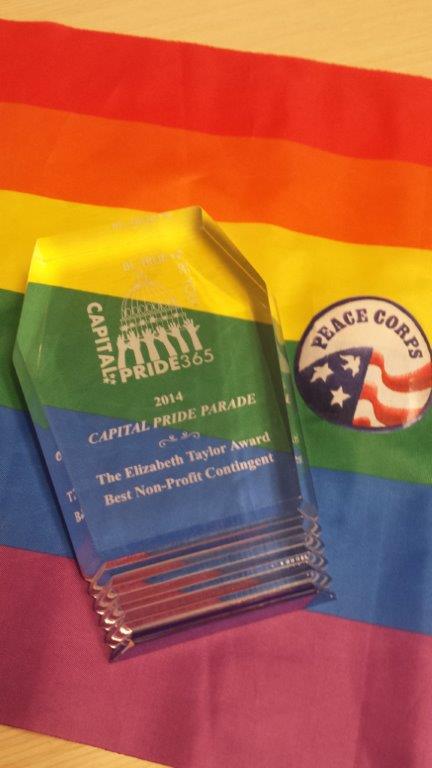 Please RSVP to spectrum@peacecorps.gov ASAP if you’d like to participate.

2. March in the parade and/or carry a flag on Saturday, June 13

3. Staff the Peace Corps booth at the Festival on Sunday, June 14

You're invited to support the Peace Corps’ participation in the 2015 Capital Pride celebration, June 13-14. We will be doing the march with country flags on June 13 and the festival on June 14! Please RSVP to spectrum@peacecorps.gov ASAP if you’d like to participate.

Join us in marching in the parade and carrying your host country's flag. There's only one for each country, so first come, first served. If you have a particular flag you would like to carry, please email Spectrum@peacecorps.gov with your name, phone number and preferred country. There are 140 country flags, so it may be good to have a second choice.

If you aren’t an RPCV, you are more than welcome to march and carry a flag. Just email your preference. Note: The parade kicks off at 4:30 p.m. Saturday June 13. Details about when/where to meet will be emailed the week before the parade.

Here is the route of the parade through Dupont Circle and ending at 14th and R streets:
http://www.capitalpride.org/parade/parade-map

The Peace Corps won the Elizabeth Taylor Award for Best Non-Profit Contingent in 2014 and the Harvey Milk Award for Public Sector Contingent in 2011 and 2012. Can you help us do it in 2015? http://www.capitalpride.org/parade/contingents/awards

2. Help make buttons and posters for the Peace March! This year’s Capital Pride theme isFlashback, and the Peace Corps will be doing a Peace March. In addition to the country flags, we’ll be carrying posters with retro Peace Corps ads and some pro-peace messages. We’ll also have a button press available to make buttons. We’ll have designs and materials for buttons and posters, we just need you. Come help make posters and buttons on June 12 from 1–6 p.m. at Peace Corps Headquarters (1111 20th St. NW). Email spectrum@peacecorps.gov if you are interested or have questions. (And yes, we will be doing a 1960s theme for the Peace March, so you are encouraged to wear vintage on June 13.) One more ask: If you know someone who has a VW bus that could be used in the parade, contact Sarah Blazucki at sblazucki@peacecorps.gov.

3. Volunteers needed to staff the Peace Corps booth at the Festival

Once again we'll be hosting a booth at the Pride Festival. If you would like to staff the booth, please email Garrett Hayes at ghayes@peacecorps.gov.